The Simple Guide To Bombay Cats Bombay Cats At A Glance:

Everything You Need To Know About Bombay Cats

And this one is special to me because it talks about black cats! I have a special place in my heart for black cats because they are often the ones left and shelters or dumped on the side of the road more than other color cats.

Why? Well, I plan to do an entire post about facts regarding black cats but the short answer is fear.

They see a black cat and they think of them as superstitious and bad luck and therefore don’t want to add them into their home.

How silly right? Silly and sad for the black cats, which just makes me and their awesome owners love them even more. So I’m going to talk about one of 22 different black cat breeds titled the Bombays.

We are going to discuss the history behind the this breed, some health information about them, the typical personalities as well as throw in some fun facts about Bombays. Everyone seems to love the fun facts so I figured I would add them in.

This breed was requested to be researched, so if you have a breed you’re interested in learning about, make sure you go to my contact page and let me know!

Let’s start by talking a little about the history of a Bombay Cat.

This breed tends to resemble the Burmese Cat a lot, partially because they are bred by mixing Burmese cats with American Shorthair Cats to get their ideal Bombay breed. Cat breeders have been interested in this cat breed ever since they came into existence.

This breed hasn’t been around all the long. In fact, the breed started in the 1950s by cat breeder Nikki Horner in Louisville, Kentucky.

She wanted to create a cat breed that closely resembled the black panther.

And from the look of this cat, it’s safe to save she did a pretty good job. She coined Bombay cats as “parlor panthers,” and described their look like the “patent-leather kid with the copper penny eyes.”

Even though this breed started in the 1950s, they were not accepted by Cat Fanciers Association until 1976.

Cross breeding to both sable Burmese and black American Short Hairs are still allowed by the Cat Fanciers Association, although the Bombay is a true breed with its own particular look and characteristics.

What is a Bombay Cat? This cat breed is known for being short hair black cats.

They have silky black fur, black paws, and yellow or green eyes. The fur of this breed is silky and fine which means they hardly shed. So if you want an animal-hair free house, brush your Bombay and you will have that.

This breed is known for being muscular, which also means there’s more them than meets the eye.

They may look lean, but they will feel heavier than they look when you go to pick them up.

However, their average and healthy weight for this breed sits around 8 to 15 pounds. This will vary by the cat, and usually, males tend to weight a little more than females on average.

This domestic cat breed is prone to overeating, so it is important that owners of a Bombay watch their food intake. This is really one of the biggest health problems with this body type.

Their overeating can cause them to be overweight and put a lot of strain on their little muscular frame. It is recommended that this breed follows the recommended food amounts that are found in the typical cat food bag.

So how long does a Bombay live?

If a cat is kept at a healthy, normal weight, then the average Bombay cat lifespan for this breed is around 15 to 20 years.

This lifespan is actually on the longer ends of the spectrum for a lot of breed with 20 being very old age for a cat.

>>>YOU MAY LIKE: Everything You Need to Know About Maine Coon Cats 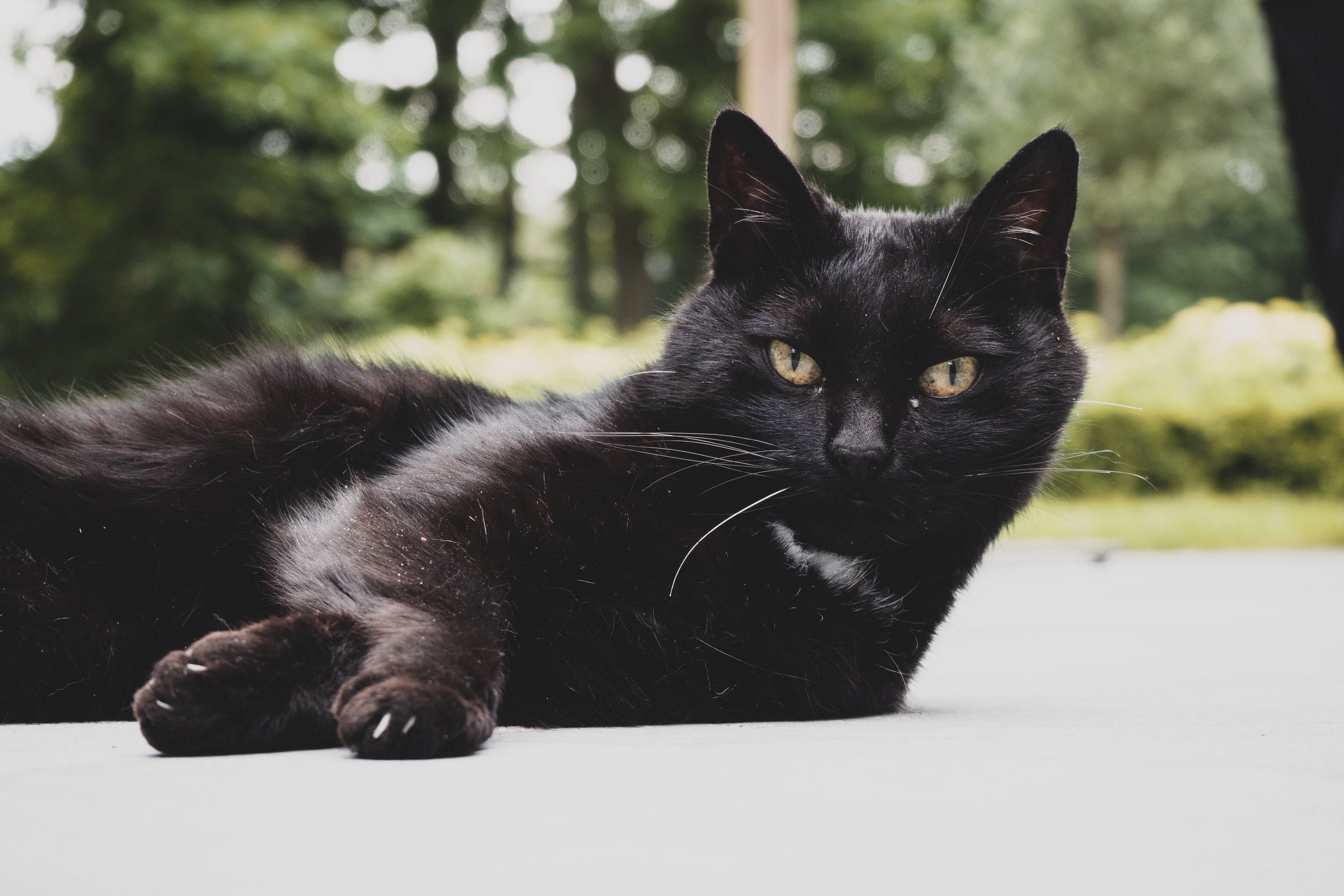 The Personality of Bombay Cats

When talking about the Bombay personality, they are highly intelligent, gentle and affectionate. They are one of the closest cat breeds to dogs because of their lap-dog like personality.

This cat breed makes great family pets because they are likely to get along well with other cats as well as children.

My parents found and adopted a cat of this breed. Her personality really spoke for itself.

She was kind and sweet and very welcoming of people. Once she got used to the humans she was around, she becomes the sweetest cat. A perfect example is when my parents adopting their puppy, Lola.

Lola was small! Like shockingly small for a puppy. And Penny took it upon herself to act like a mommy to this dog. She groomed her, kept her close, and let her follow her around wherever she went.

Lola is bigger now, and they still chase each other around the house. They wait for each other to go outside, and sometimes even snuggle together when they don’t think people are looking.

What is so sad is that we have to be SO careful with her one time a year. That is during Halloween. We keep her inside because that is the time of year where people will attack black cats because they see them as being ‘suspicious’.

It’s sad and honestly pathetic by the humans, especially considering the type of cat she is.

This domesticated cat is bred to look like a wild cat and they resemble a black panther with beautiful copper eyes. While there are many black cats that are various breeds, few are actually considered a true Bombay.

Yes! The favorite section of most people’s lives!

Sure, you want to know how long your Bombay cat will live, and where the origination of your breed was from. But what will actually make you interested are the small jeopardy-like facts that you can tell other people about your cat breed?

So without further ado, the Bombay cats 101:

o    This is actually where they have gotten their name, Bombay. The creator of the Bombay breed wanted to make a cat breed that was a mini version of the Indian black panther. So it’s only fitting that when she succeeded, it was considered the black panther’s mini-me! Bombay is a medium sized cat even as an international cat. Although, they are still much smaller than their wild cat ancestors. They are known to resemble the black leopard in the wild.

•    Their ears have a slight curve and are widespread

o    This is one of the defining features of a Bombay characteristics. Here’s the deal, there’s a lot of breeds that can have black cats. So a lot of the time, when people see a black cat, they just assume it’s a different breed. So you have to use these distinctive features to know if the cat is indeed a Bombay.

•    The Bombay has very distinct golden eyes, which have been called “new-penny eyes”

o    This is another distinctive feature of the Bombay. If you have a black cat that does not have golden copper eyes, then it is probably not a Bombay cat!  Simple as that. However, if you still think there is SOME Bombay in your cat, you can always do a DNA test for your cat. BasePaws has some awesome products and one that will give you the COMPLETE history of your cat. AND, you can use code LLAPTRIBE to get $10 off your order. (TEN DOLLARS! HOLLA!). So if your cat doesn’t have the golden eyes, but does have other distinctive features, maybe it is half Bombay, half another breed.

•    As kittens, they are born with a faint tabby-like striping, which fades as they grow

o    I added this fun fact in because let’s face it, it’s kind of cool. Their color pattern changes as they grow! How cool! Their coats are still extremely glossy and easy to maintain. Weekly brushing and a healthy diet help to keep their silky black coat shiny and healthy.

o    Most cats are known for being very independent. They do what they want when they want. And if you want them to do something differently…HA! Good luck! This breed, however, are fairly easy to train. It is always recommended to clicker train or treat train a cat. But Bombay cat breeds are usually easier to train than others.

•    Bombays are fiercely loyal to their owners

o    Like the Black Panther, they love their packs. And there are fiercely loyal to their pack. So if you have a Bombay, they will love you and be loyal to you FOREVER!

o    We don’t mean like like actually looking for heat, but Bombay cats like to be warm. If it’s cold outside, or chilly in the house, your Bombay is very likely to be in the warmest place in the house. They love to curl up near anything warm to have the heat radiating around them. If you live in a cold environment, you will need to make sure that your Bombay is kept warm and snuggly indoors. This is not the cat breed to have as an outdoor cat unless you are in warm climates.

Should I Adopt A Black Bombay? Or A Black American Shorthair?

Think you have a black Bombay? Hopefully this post helped you determine if you do. I also hope if you are considering adopting a kitten that you take a Bombay, or any black cat breed into consideration.

They are not unlucky or evil. They are as sweet and kind as any other cat as long as they are given the right tools to know and love you. I hope you enjoyed this Bombay cat breed information.

If you look at my mom’s cat Penny, you would never think of her as unlucky or scary. In fact, she’s a very lucky cat because she found us for a home. And we were lucky because we got to add a great cat to our family. 12 thoughts on “The Simple Guide To Bombay Cats”