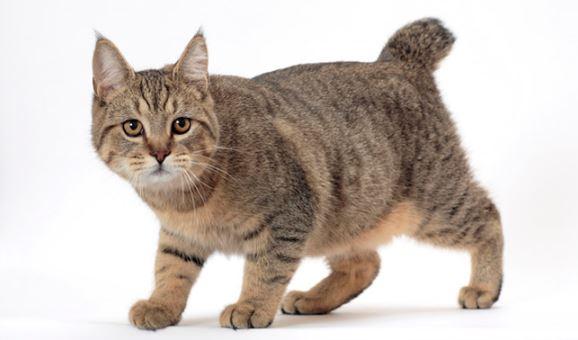 All About Pixie Bob Cats

Continuing on with the cat breed series, let’s dive into some more unique cat breeds. Today’s being Pixie Bob Cats.

This is a cat that I am sure you have seen in passing. This domestic breed looks unique and has a personality to match!

What is a Pixie Bob Cat?

A Pixie-Bob is a domestic cat breed that looks very similar to the well-known bobcat. A lot of people claim that Pixie-bob are considered larger than the average cat breed.

However, Pixie-Bobs typically weigh between 11 and 13 lbs, which is only slightly heavier than a typical cat breed. (Or average if you kitty is a little on the chubby side).

This large breed looks a lot like bobcats with their stubby tail and their fur coats, but their ownership is not restricted to other wild cat breeds, such as the serval cat.

Have you found a cat with a stubby tail and aren’t quite sure of the breed? Well, in most cases, a pixie-bob cats are known for having black fur and skin on their paws and ears.

They have heavy ear hair and white fur around the eyes. Most are short-haired, but they are not limited to that.

If your cat has copper or brown eyes, chances are it is not a full Pixie-Bob. Pixie-bobs typically have gold/green eyes to really round out their bobcat look.

>> You May Also Like: 7 Helpful Tips For Adopting a New Kitten

What are Pixie Bob Cats Known For?

Pixie-Bob cats are known for their muscular build, with jagged black stripes and a rich brown color.

Beyond their beautiful appearance and large size, these cats have many unique features. Their tails are much shorter than the average cat.

This breed is also known for their way of communicating. Unlike most other breeds, Pixie-Bobs rarely meow. Instead they are known to chatter and chirp at their owners

They can learn several commands as well as learning their name. They can even be taught to walk on a leash like a dog. With a cat as smart as the Pixie-Bob, you’re bound to have lots of fun!

When looking at the history of the pixie bobcat there is mainly speculation that they come from bobcats.

Our friends over at Cattime claim that the breed was started when there was a suspected mating of a barn cat and a wild American bobcat.

Again, their true history is not really known and there is not a lot of proof behind this myth. In my own thoughts, I think there was a breeder who intentionally bred these two together.

I have no proof as to why this would have happened. It is purely on the basis that an American bobcat choosing to mate with a barn cat, or even come into contact with a barn cat.

There will also be some legend as to how this breed was started. However they were started, they are here now!

What is a Pixie Bob Cat’s Personality?

Pixie Bob Cats are known for being affectionate. However, it is important to remember they are still a cat. That means chances are, they will be slightly aloof. It is also important to know that every cat is going to have their own personality.

With that being said, most pixie bob’s tend to be a very laid back breed. They are definitely people lovers and want to be given the attention of a dog.

Similar to that of a dog, Pixie Bob breeds are looking for a companion to cuddle up with and have a special bond. Even though this breed is laid back, you still want to keep their playful side at bay with lot of toys.

In my opinion, I would choose some interactive toys, such a laser pointer to play with the cats.

If you get an automatic laser pointer, your kitty can play and have fun without completely destroying your house. (Just make sure you have enough room for the laser pointer to go around.

>> Get An Automatic Laser Pointer On Amazon Now!

One of the great things about Pixie Bob-Cats is that they have typically good health. On average Pixie Bob Cats live for about 13 to 17 years.

The average lifespan of a Pixie Bob is 15 years old.

Now, just because the crossbreeding of this bred has allowed for less health issues than a typical domestic cat breed doesn’t mean they are immune to health issues.

Pixie Bob cats have a genetic mutation that causes them to have a short tail in most cats. This can lead to potential issues in their back legs and nerves.

These issues can cause lame legs and even problems going to the bathroom in worse cases.

Pixie Bob Cats are a great breed for families, especially families with children. Because of their want to bond with humans, they are loyal and devoted family members. They tend to bond easily with new families, especially children, although it is important to remember each cat is unique.

This breed is also known to get along well with other pets and even as a “watchdog” protector over the family. Man! Now I am wanting to get a Pixie Bob Cat when we have children. (We won’t…only because that would be five cats and I think I would lose a husband). 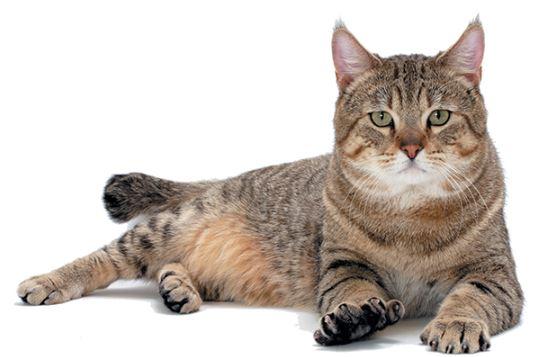 Should You Get A Pixie Bob Cat?

Pixie Bob Cats are a great breed to add to any family. If you have cats and dogs, Pixie Bob-Cats are known to be friendly to animals and children alike.

Their intelligent personality allows them to be trained easily, and they can even be trained to walk on a leash.

If you are going to a shelter to adopt a cat, I highly recommend looking for their large build and short tail. Their build and eyes are a dead giveaway that you are adopting a Pixie Bob Cat breed!

Pixie Bobs can learn several commands in addition to their names. This breed can even be taught to walk on a leash.

Pixie Bob-Cats come in both longhair and shorthair versions. The shorthair has a thick double coat, while the longhair’s coat is medium up to 2 inches in length with a softer, silky texture.

While bred to have a wild look, they are pretty much easy-going household cats. Cats are not usually known for having a love of water, but most Pixie-bobs do.