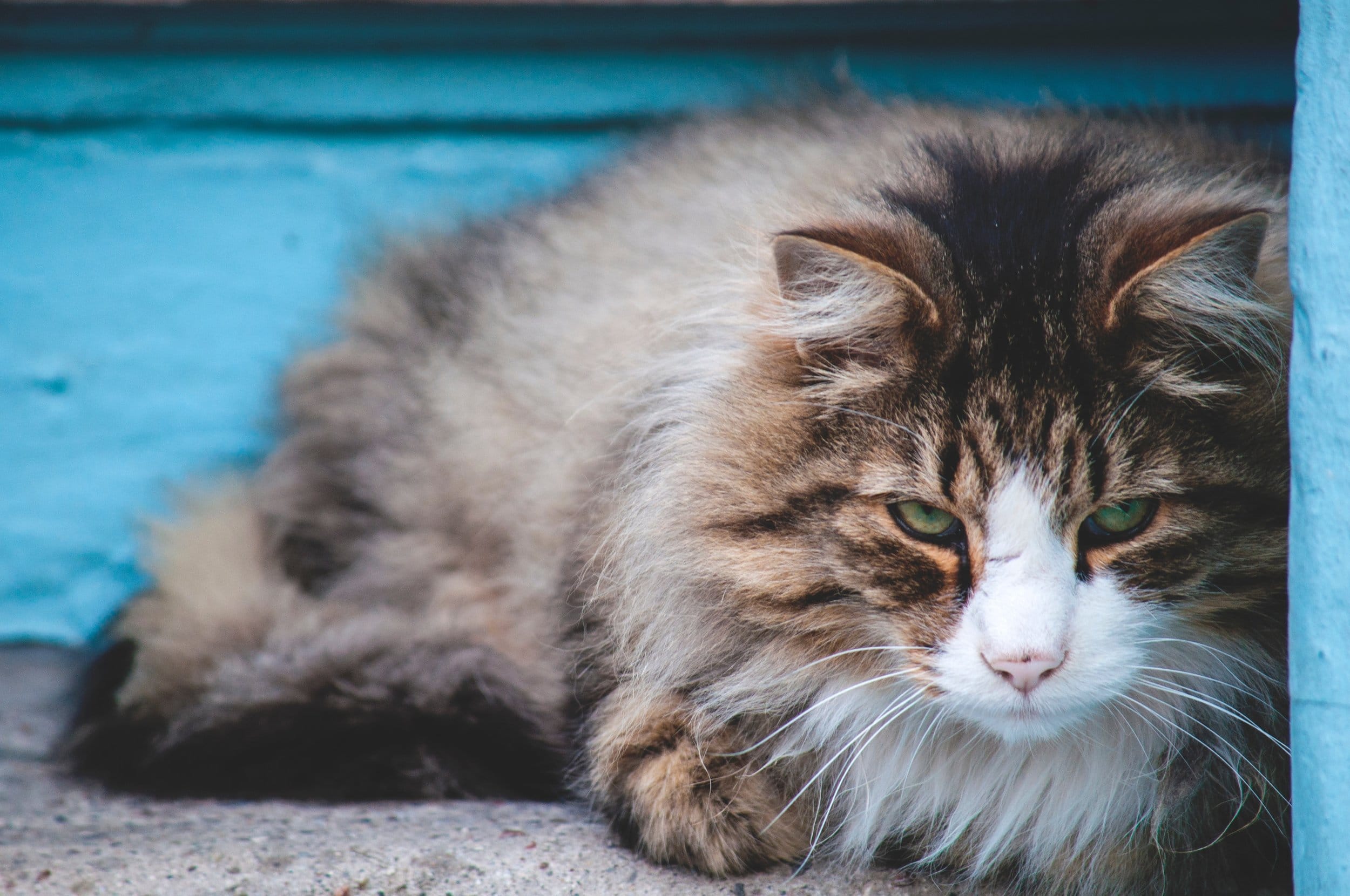 Everything You Need to Know About Norwegian Forest Cats

The breed series is back! And we are talking about a breed that is very special to me today.

That breed is Norwegian Forest Cat. This breed is not commonly known because they are often mistaken with Maine Coons, American Shorthairs, or just overweight cats.

This breed holds a special place in my heart because I recently found out that this is a majority of the breed that my cat, Phoebe is.

Recently, I did a Cat DNA test, BasePaws.

This test revealed to me that not only was I incorrect in thinking that Phoebe was an American Shorthair, I learned that the majority of her origin was that of a Norwegian Forest Cat.

Which, of course, led me to do a lot of research on everything I could learn about this cat breed for my own sanity. And now, I want to share with you my crazy amount of rabbit hole searching that I went through involving Norwegian Forest Cats.

Where Did Norwegian Forest Cats Come From?

Let’s talk about the history Behind Norwegian Forest Cats.

Does anyone want to take any guesses where they think the Norwegian Forest Cat got their names? Chances are…you are correct! 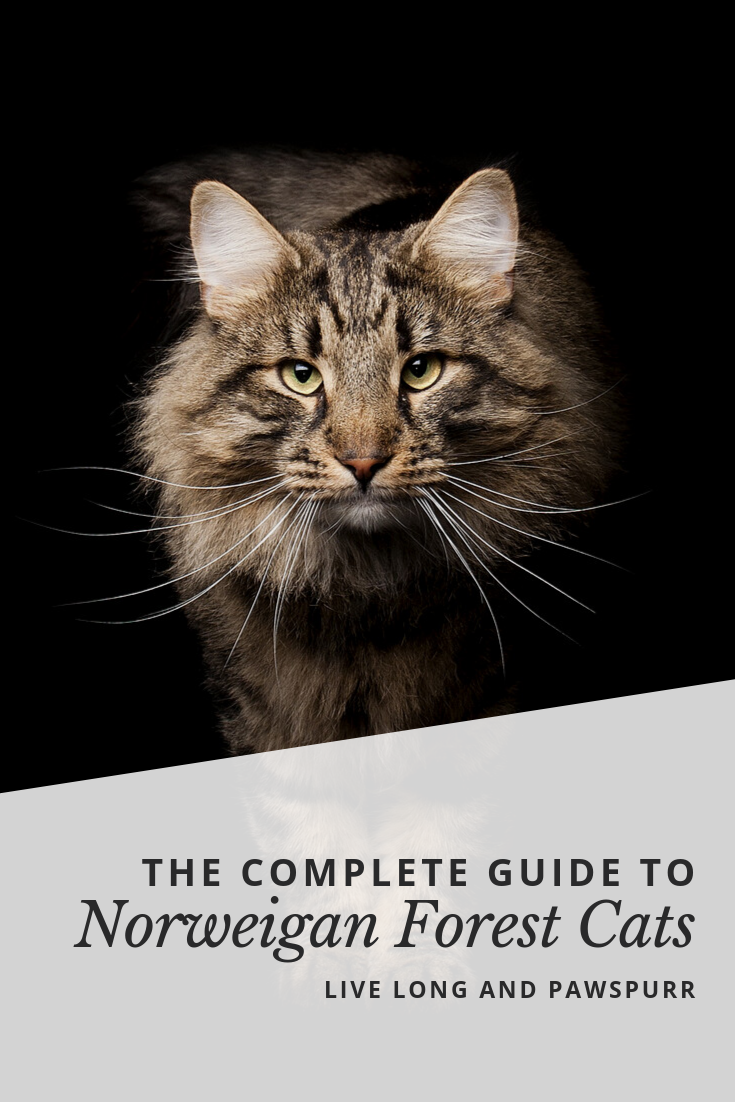 At that time, other cat experts were determined to save the breed after World War II ended. They were successful in bringing them into the Europe show ring as well as into America around 1980s.

Which actually, if you think about it is only about 40 years or so ago!

That means that Phoebe’s ancestors have only been in America for about 40 years! Which is even less than a lot of us.

And while that makes them extremely new in the eyes of Europe and America, Norway has known of this breed since…well, forever.

This breed was told in their folk tales and mythology and was thought to be descendants of the Mynx Cat or the Maine Coon cat breeds.

This would explain why they are not quite the same size and stature as a Maine Coon cat, but still larger than many others.

All About The Health of Norwegian Forest Cats

Norwegian Cats are known for maturing later than a lot of other cat breeds.

How Long Do Norwegian Forest Cats Live For?

The average Norwegian Forest Cat is known for a being a relatively healthy breed.

Their lifespan is normally between 14 and 16 years but can vary based on the cat.

How Big Do Norwegian Forest Cats Get?

Now let’s talk about the appearance of a Norwegian Forest Cat.

They have very thick and sturdy coats that are meant to be able to withstands that harsh winters.

Their hair also is one of the few long haired breeds that does not tend to mat.

However, while mats are not usually a concern for Norwegian Forest Cats, shedding is. Is you are wanting a cat breed that does not shed, this is not the breed for you.

This breed is known for being ‘thick’. (Or Thicc as I like to lovingly call my cat).When these cats are in their prime, they are known for climbing trees and using their large muscles to help them climb and survive in the wild.

However, when they are indoor cats, sometimes they will get labeled as being ‘big-boned’. 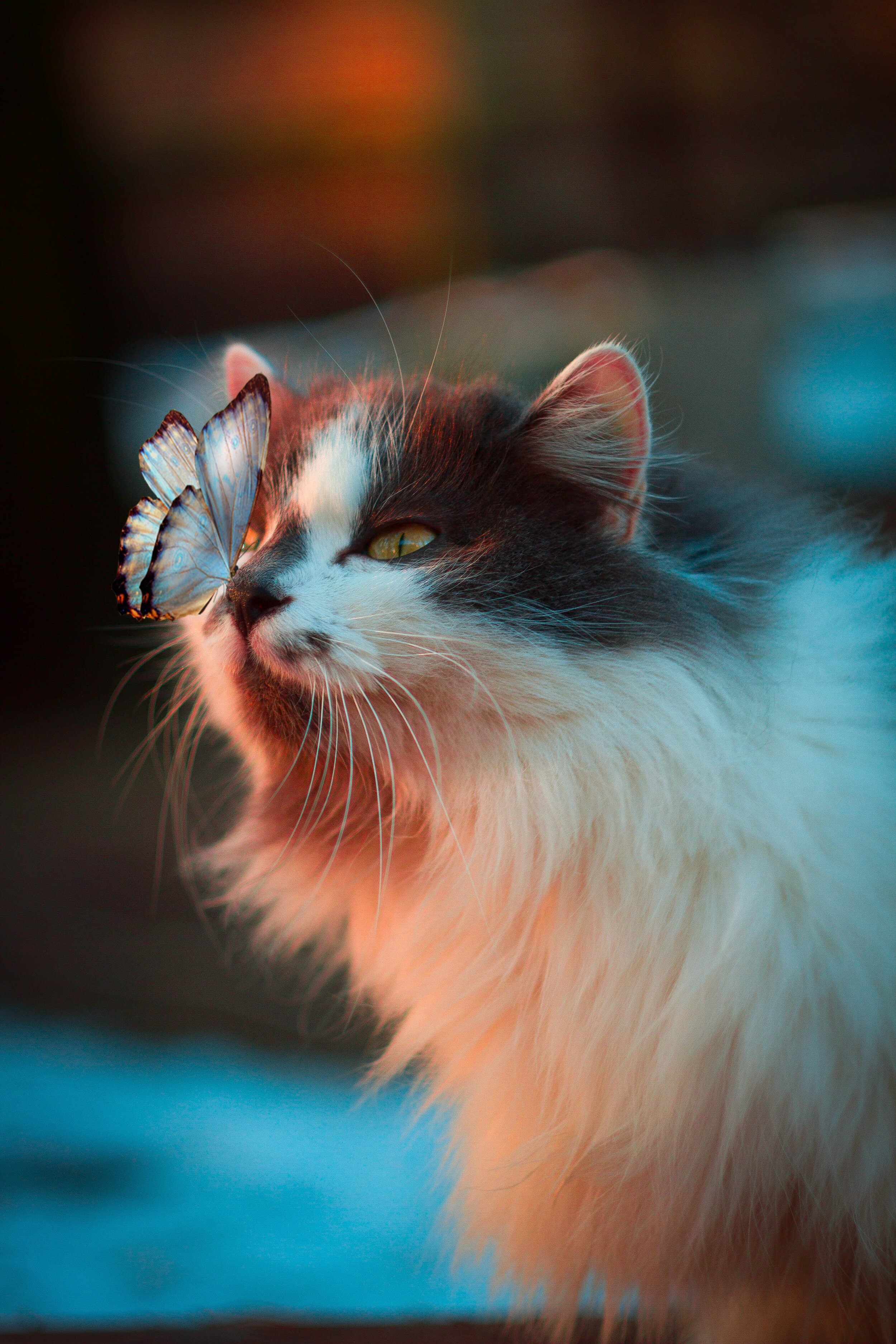 What Are Norwegian Forest Cats Known For?

Their size, stature and fur are not the only thing that sets them apart from the rest

They are large and expressive and almond shaped and the outer corner of the eye is tilted up to the base of the ear.

The color ranges from gold to deep emerald green, with the darker green color much sought after but not as common as the green-gold eyes usually seen.

What is so interesting to me as I was doing research on this breed was that this topic was brought up so often. I remember when visitors would come greet Phoebe, they would also comment on how pretty her eyes are.

Of course, being my cat I thought they were gorgeous as well. It appears that I was not being biased. Her eyes really do glow like that of her Norwegian Forest Cat ancestors.

When I was doing research about the personality of a Norwegian Forest Cat, they all seemed to say the same thing. I like to think of this breed as the type of cat people want but don’t expect from a typical cat.

What does that mean?

Well this breed is known for being loving, loyal and kind. They are known for being friendly to people and patient with children. They find their person and become forever loving to them in the sweetest way possible.

When I was reading this, I immediate thought about Phoebe. I used to joke that she was the dog version of a cat.

This was because, like many other of this breed, she was so attentive. She would come when she was called, enjoyed sleeping and cuddling with me. Best of all, she refused to go anywhere where she could not see her ‘people’.

This allowed us to take her outside in our backyard without fear of her darting off.

She wouldn’t even turn a corner if we were not in her eyesight.

And while a lot of those traits are dog-like traits. She, like most of the Norwegian Forest Cats, are still very much cat personalities.

They are definite homebodies who enjoy quite nights in with humans much more than a loud crowded park.

You will also rarely find a Norwegian Forest Cat who does a lot of ‘playing’. This breed is extremely intelligent and would rather be giving attention from their humans rather than a toy.

As I mentioned earlier, this breed LOVES people and attention.

They will be the cat in your house that rubs up to visitors and wants to be greeted, petted, or loved on by everyone who walks through the door. They are very trusting of people, especially when they are in their safe environment.

Oddly enough, however, as loving and kind as this breed is, they are not lap-cats.

It would be considered odd if you have a Norwegian Forest Cat that will snuggly on your lap with you. Instead, they should their love and care for you by proximity. Phoebe, for example, has to sleep at the foot of my bed every night. She does not get inside the covers ever, and is not one to curl up in my arms.

She does need to feed me before falling asleep though. And to her, my leg, my arm, anything of mine is a comfort to her.

While they are able to survive out in the wild, the personalities of a Norwegian Forest Cat best suit an indoor lifestyle.

They prefer the comforts of home and their hunting ‘desires’ are not as strong as other breeds. If you are looking to adopt a Norwegian Forest Cat, do not do so if you are planning for an outdoor cat. You will not be seeing the best that your cat has to offer when they are outside.

Finally, we mentioned their muscle and build earlier in this article.

They are known for climbing and jumping on items in the outdoors. To keep their instincts sharp, and prevent them from climbing on unwanted objects, a tree is a necessity for this breed.

I noticed a HUGE difference in Phoebe when we got her a cat tree, actually this cat tree if you are curious.

So if you have a Norwegian Forest Cat and don’t have a cat tree, I would highly recommend a purchase of that. My Norwegian Forest loves it because it has multiple platforms for her to jump on and play with the other furb-babies with. Multiple landings are a huge benefit with cat trees!!!

Should I Get a Norwegian Forest Cat?

Norwegian Forest Cats are a very loving, and gentle breed.

While they have been around for longer than we can even know, their breed is new to Europe and America.

They are known for being muscular but reserved creatures who prefer to climb.

If you are looking for a cat that will be your best friend, enjoy being the center of attention (remember, they like people and attention), and be a basic homebody INDOOR cat, then the Norwegian Forest Cat is the cat for you.