What Colors Can Cats Really See? 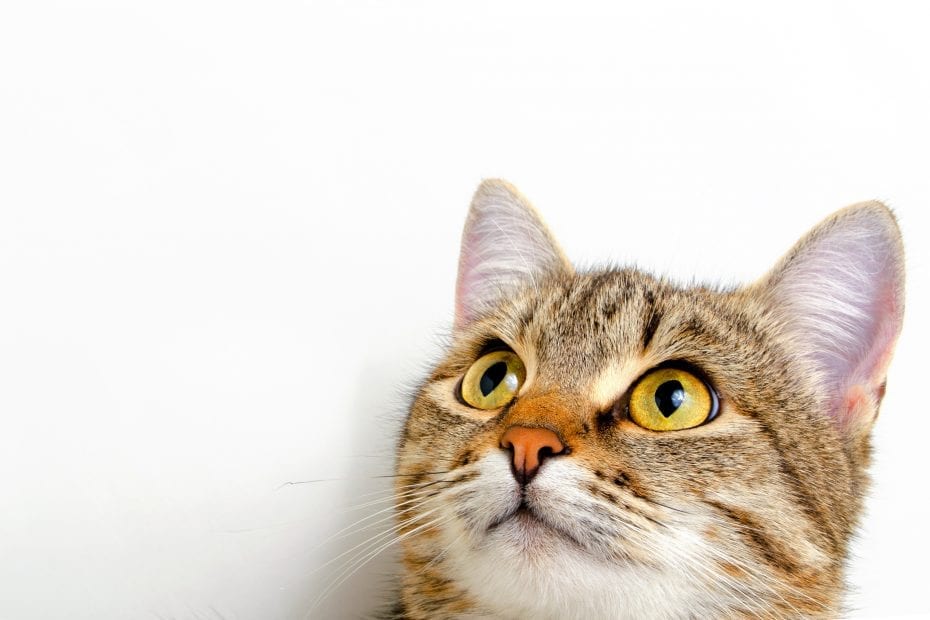 What Colors Do Cats See?

When it comes to cats, there are a lot of myths that seems to circulate about them.

That’s were I come in.

My goal is to find these myths that many people still seem to believe and find out of they are true or not. Kind of like a myth buster of cats. Today’s myth, What Colors Can Cats See? 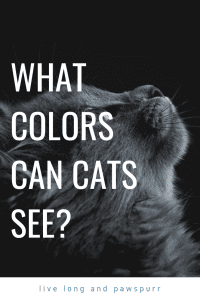 I have started debunking some myths like, why are black cats considered back luck?

And this myth is one that I feel like has not been reviewed by most. I want to talk about the myths that many people think about what cats can see, and then finally debunk it.

The Myth About Colors Cats See

So, let’s start by talking about the many myths that exist.

Do Cats See in color or in black and white?

Some people think that cats see only in black and white. They think that because many think they based on the their brains development that they can only see in basically a grey scale.

Another myth is that cats see exactly what humans see.

Their brains are actually more similar to humans than they are dogs, so it would make sense for people to not believe the grey scale and go to the complete opposite direction, they see what we see.

How Do Cats And Human See Color?

Just a quick background knowledge that will help SO much later on is explaining how the perceptive of color really happens.

Color is discerned by the nerve cells in the eye. The retina of the eye has two main types of cells–rods and cones.

The ability to differentiate colors is determined by the presence of the special color sensitive cells called “cones.”

Just as cones are responsible for distinguishing colors, rods have a special job to do as well. Rods detect light levels and motion. Cats have more rods than humans do, giving them the edge when it comes to seeing in low light or identifying moving objects.

Do Cats See In Black And White?

Human and feline eyes have three types of cones that can identify combinations of red, blue, and green.

But because humans have 10 times more cones than cats do, they appreciate more color variations. In scientific observations, cats don’t appear to perceive the full range of colors that humans can.

Cone cells are used for the ability to differentiate color as they are color sensitive cells. Human and cat eyes have three types of cones that can identify combinations of red, blue, and green.

So no, cats don’t see in black and white.

Ready to get down to the truth?! I know I sure was! I wanted to know. The truth is a combination of the myths!!!

They are limited in the ALL the colors that they see. They can see some colors, and others tend to blur.

I would equate it to someone who is color blind.

How Does A Cat’s Vision Compare To Human Vision?

Just because cats don’t see all the colors we do, doesn’t mean they don’t perceive or find value in different colors. I like to compare it to men and women comparing paint colors. Women will see 10 different shades of brown, men will see two. (that’s an exaggeration to make my point). Just as men tend to be less sensitive to difference rich tones, cats don’t have the ability to notice the change in brightness of a color.

Cats have a wider field of view — about 200 degrees, compared with humans’ 180 degrees view.

However, humans have a greater visual acuity compared to their feline friends.

Most cats only see up to about 20 feet, whereas humans can usually see objects clearly ten times farther, up to 200 feet away. This is, of course, unless they are nearsighted. Fun fact, cats are actually more near-sighted in general than the average 20/20 vision human.

How Do Cats See Colors?

The human retina has about 10 times more cones, the light receptors that function best in bright light, than cats’ eyes have.

Cats, however, have more rod cells in the retina than a normal human. What are rod cells?

As you read above, rods are responsible for detecting motion at great distances.

So, when compared to humans, cats see better in dim light (dusk and dawn) and more accurately detect motion.

>> You May Also Like: Why You Should Not Adopt a Cat 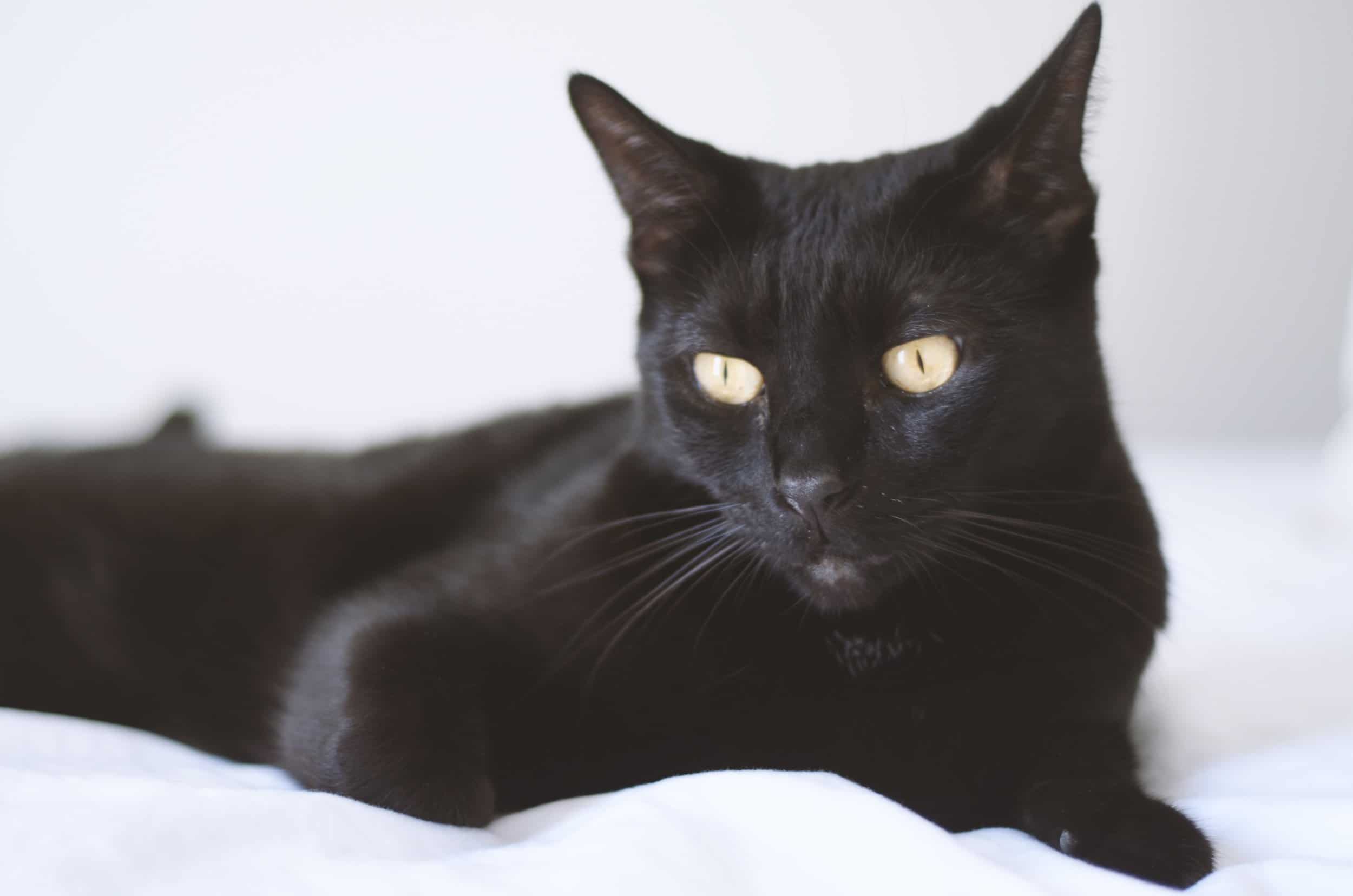 Humans also have three types of cones, allowing them to see a broad spectrum of colors, with sensitivity peaks at red, green and blue.

But because humans have 10 times more cones than cats do, they appreciate more color variations.

In scientific observations, cats don’t appear to perceive the full range of colors that humans can.

Some scientists believe that cats see only blue and gray, while others think they see also see yellow like their canine counterparts.

In comparison, a cat’s vision is similar to a human who is color blind.

They can see shades of blue and green, but reds and pinks can be confusing.

These may appear more green, while purple can look like another shade of blue.

What Is Color Blindness?

So what actually does it mean if a cat is considered color blind?

Other people find it difficult to notice shades of colors or to compare colors.  Cats do not have a deficiency of the eye itself.

Humans and cats both have two types of color receptors in their eyes: cones and rods, as mentioned above.

Within the eyes, thee cones handle vision during the day and color perception. Each cone detects the wavelengths of light. Humans have three cones and so can generally detect the whole spectrum of light. Cats have just two cones, which limits the spectrum of light they can see.

At night, Rods tackle the ability to see from side to side and all around (peripheral vision).Which is why cats are able to see so well at night!

What do cats see when they look at humans?

So how do the cats see the world? Myth debunked, cats visions are not completely grey scale.

But if you were someone who believe that they see exactly the same as we do, you are half right.

Compared to human eyes, cats actually have much better eye sight in dim light as well as overall night vision.

However, human vision wins when it comes the color spectrum. Pretty cool huh!

And while the topic of rods and cones tends to lose some people (me at first), it’s actually quite interesting.

They see exactly the same as some humans. Humans who are color blind. So not like every human. But hey! That makes cats more like us than we originally thought!

What Does This Mean For Your Cat?

While cats are born with this ability, or inability, to see all colors. There really isn’t much you can do to “help” them. (Mainly because they actually don’t know any better!) However, it is important to know that buying toys that are bright colors won’t stimulate your cat as much as movement.

Toys that are both red and green can confuse your kitty and cause them to become less interested in the toy than if it were blue or yellow. And if you are feeling crazy when it comes to cat toys that move, throw some green in there too! 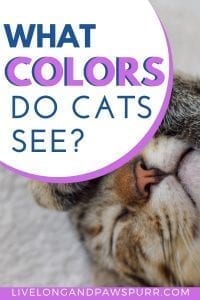 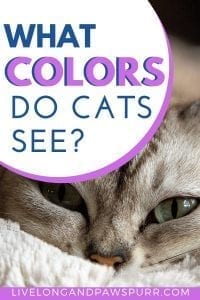 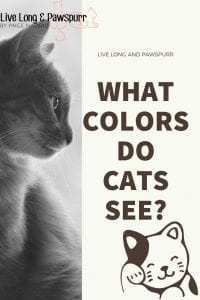 4 thoughts on “What Colors Can Cats Really See?”