When it comes to cats, laser pointers are one of the first things you think about. For something so small and scentless, that little red dot sure can keep cats busy—in spite of the fact that they never really can catch it.

So why do cats chase lasers, is it good for their healthy, and is it time to ditch the laser in favor of a different type of toy?

So what is it about lasers that make cats go crazy? Lasers are inherently stimulating to cats because of what they represent: fast-moving prey.

Even the most spoiled kitties are still hardwired for hunting prey.

As the dot moves around the room, your feline friend sees it as something that is running.

Their wild behavior come out wanting to hunt, pounce, even kill the movement in question.

With Wobbles, even the movement of a light is enough to make her start dashing towards the item.

>> You May Also Like: The Honest Review of The Catnip Banana

How Do Cats See Lasers?

While their natural hunting instinct is going to kick in once the laser starts moving, there is more that adds to the appeals of laser.

There’s another factor at play here too when your cat chases a laser, and that’s the fact that it simply looks appealing.

To know why lasers look cool to cats, you have to understand how cats see colors.

In short, eyes are composed of two key types of cells: rods and cones. Rods deal with low light vision and detecting movement, while cones help the eye see color.

Cats, on the other hand, have more rods than cones, making them experts at picking up even the slightest of movements.

Then that’s all it will take to start its predatory cycle.

It is important to note that not all cats are as engaged with laser as the stereotype has them to be. A lot are. But Phoebe is a perfect example of a cat who will not chase a laser pointer.

Doesn’t matter if it is moving, staying still or just appears right next to her. Nothing. 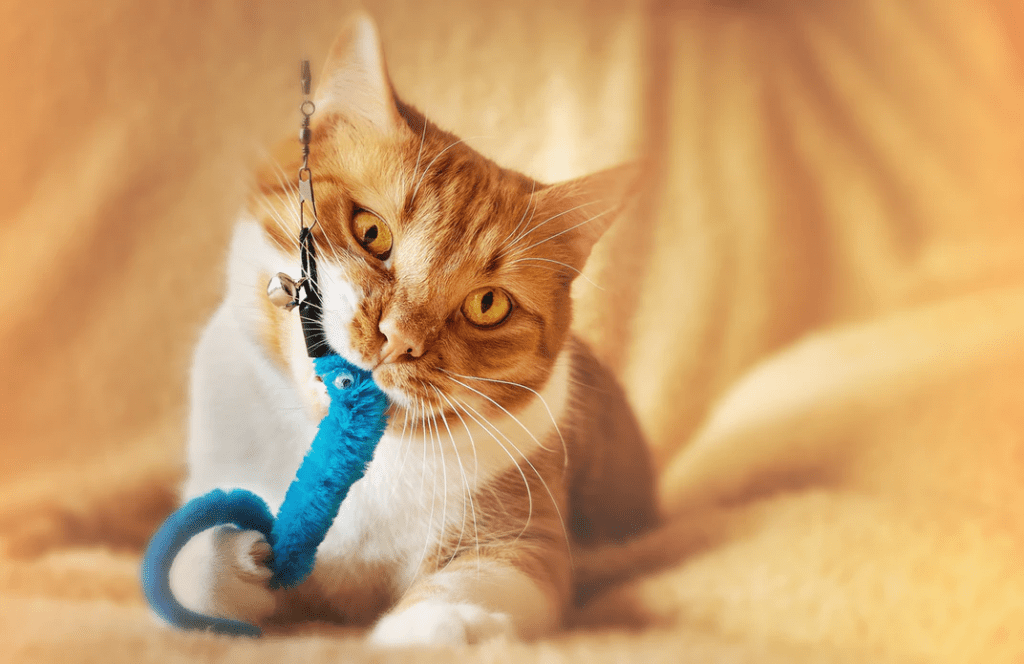 The Debate Over Cats and Lasers

Like everything else in life, there’s some controversy over whether it’s a good idea to tempt your cat with lasers, but the cat-laser debate is one that has been going on for some time.

The main problem noted by cat enthusiasts who are anti-laser is that having your cat chase a laser is a form of teasing.

The thought is that your cat is trying to stalk and hunt the red dot because that is in their instinct and it is not jump a form of play.

Some cats figure out the ruse and stop interacting with the laser, like Phoebe as I mentioned earlier.

Some can find it immensely frustrating and may start behaving badly as a result. If your cat gets frustrated, they can act out in destructive and even aggressive ways.

If you notice a connection between playing with your cat and a laser and bad behavior, it’s probably time to put the pointer away for good.

Lasers And Anxiety in Cats

I also like to warn people if the laser seems to be giving your cat anxiety, it is probably not the right fit for your cat.

When we first got a laser pointer, Wobbles would chase it so much that she would start panting. And worse, she would start to meow when we stopped it because she couldn’t find it.

We stopped playing with it until we got the kittens and she grew up a little more and now she doesn’t get as worked up over it anymore.

To help make laser pointers more of a game and less of a tease, give your cat a treat or a physical toy right when you’re finished playing. That way it’ll get the satisfaction of a “kill,” even if it’s not of the laser itself.

Lastly, the important thing to remember with the laser pointer is that it is meant to stimulate your cat and keep them moving. If that is what it does, then it is a great toy for your cats.

If it seems to be doing more harm than good, then look into other toys to stimulate your cat. Trust me, there are plenty!

>> Get Your Own Automatic Cat Laser On Amazon Now

The debate in no way should make you feel like a bad pet owner if you decide to use a laser pointer with your pet. Most of the time, cats like laser pointers!

There are so many ways you can utilize the laser effectively and is a fantastic way for your cat to get some physical and mental exercise, and also lets it tap into its kitty instincts for a bit—something that indoor cats don’t get to do quite as often as they might like to.

There are a handful of safety and basic tips you want to take into consideration when getting a laser pointer.

Why do cats like laser pointers? Basically because they move. So you have to make the decision how you want the laser pointer to move.

If you go with a handheld laser pointer, you need to be prepared to move the laser around. And keep moving it for the length of time you want to play with your cat. An Automatic laser point will move around for you.

I will do a deep dive into these laser later, but an automatic laser will also go in the same pattern every single time. A repetitive movement like that can sometimes cause your cat to get bored.

Personally, I like to mix it up. Sometimes I will play with them with the handheld laser, and other times I will turn on the automatic laser. My arm gets a break, and they don’t get used to any one particular pattern.

Don’t shine the light directly in your cat’s eyes.

Even toy lasers emit an incredibly bright light. So you must make sure not to shine it directly at your cat. This could cause vision problems and/or eye injuries, especially if done repeatedly.

Provide your cat with plenty of other toys.

If the laser is your cat’s only outlet for play, it’s more likely that frustration will start to build up. Make sure that it has access to a lot of other objects for hunting and playing with, including catnip toys and wands.

If you want to check out some of my favorite cat toys, check out 6 Cat Products You Should Be Buying From Amazon!