Why Do Kittens Fart?

The next section in question series is one that many will find humorous, but hopefully valuable. I want to ask the question, why do kittens fart?

Backstory Behind Why Kittens Fart

Some back story behind the question.

We recently have gotten two kittens to foster.

Their names are Chloe and Zoe and are about nine weeks old now. I will have an entire post written about them and their story, but they are important to this backstory.

Anyways, so this is the first time that my fiancé and I have had healthy kittens at this age. (Binx, our first foster, was quite ill and went to her forever home at about seven weeks. And I found Phoebe at about a year old, and Wobbles was adopted at about 8 months).

So again, we were in a newer situation that we were used to. 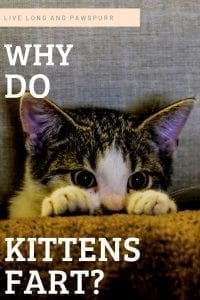 These kittens were healthy, and wanted to eat!

And we loved it!

They had very normal bowel movements (gross for some people, but exciting for the people who had had sick kittens). But man!

Could they light up a room! Sometimes it would be deadly, and all you would hear is a small puff of air…and BAM! Death by kittens.

And this led us both to ask the question, why do kittens fart?

And why do their farts smell so bad!

Why Do Kittens Fart?

So let’s answer the first question first. Why do cats fart?

Well farting, or flatulence for the fancy folks, occurs in kittens similarly to how it does in humans. It is a build-up of gas in their digestive system that has to make its way out of the body!

One of the reasons kittens tend to be gassy is similar to that of humans.

And kittens…growing kittens who are constantly staaaaving (starving) tend to want to inhale their food!

How To Prevent Cat Farts

While this is understandable at this age, if you notice them being excessively gassy or constantly inhaling their food, you want to work on the proper measures to teach them to slow down as they age.

Otherwise, they will end up being overweight and have to go on a diet, which neither you nor your kitten wants.

What I usually recommend to people who claim their cat eats too quickly is an interactive bowl, like this. It makes the cat HAVE to slow down to eat it because the food isn’t as accessibly available to them.

Eating too quickly is usually the case with most kittens gas and usually goes away with age.

.When Should You Worry About Cat Farts?

If you notice their gas not going away with age, you may want to take them to the vet.

Excessive gas that does not go away with age or eating habits can be a sign of digestion issues or even food intolerances in cats.

Gas can be normal!

If it is not normal or does not go away on its own, talk to your vet.

They will tell you exactly what is going on with your kitten rather than scaring you with one of a million different things that could be wrong.

Why Do Cats Fart?

If you have a smelly cat, fear not. In kittens, this can go away on its own.

You can also help them slow down on their eating with bowls that make them slow down. Just like in humans, gas can be a sign of eating too quickly.

However, if you notice your cat still having gas regardless of slowing down on eating, visit your vet.

Gas could be a sign of a lot of issues, and rather than stressing about the millions of different things, let your vet tell you.

You don’t want to make it worse or stress out your cat attempting to self-diagnose. 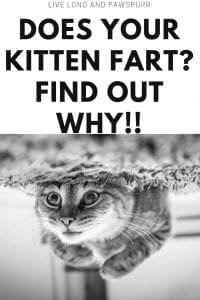 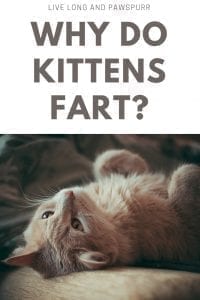 1 thought on “Why Do Kittens Fart?”